For those of you who were listening to last night's Fireside Chat, you know that we discussed several topics including film genre, costuming and art, video games, and prequels. Unfortunately there is only so much we can cover in one hour, so I want to go into a bit more detail on here.

First, let's discuss the idea of a Hunger Games video game. While I've never been a gamer (I think that the last video game I played was on a Nintendo NES), I understand the draw of them. Fans wish to immerse themselves as much as they can into the world of their heroes. Some people would say that in some ways a video game can be better than the book or the film, because you have a visual of yourself in the center of the action.
A few listeners were concerned with the violence in the game. I completely agree. Such a game could be quite horrific, with the murder of children. However, children already play very violent video games. The Hunger Games may turn more gamers into readers.

While I think that both sides of the argument make valid points, I am pretty sure that there is going to be a game whether we want it or not. In this case, I hope it's the most awesome video game ever. And hopefully LEGO.

Next I'd like to move on to Adam's costume challenge. Adam challenged me to turn one of Kate Wheeler's exquisite sketches into a costume. Well, Adam, they from a few years ago, and they're not perfect, but: 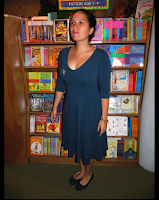 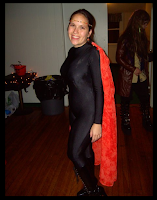 Of course I did these before I knew about the wonderful and talented Kate Wheeler, but for my next Katniss costume (which will happen), I will be basing it off of Kate's "Arena Katniss" seen below. I have always loved archery, and yearned for my own bow and quiver. Perhaps now is the time to invest in one.

The last thing I want to speak about is the genre of the Hunger Games movie. It was suggested that it might be considered action, or science fiction at the cost of a character driven drama. I am of the opinion that it will be all three. The action part is apparent. The arena is brutal, and there will be a lot of running, fighting, and killing. The science fiction part may be less obvious, but since this is a futuristic world with new technology in a dystopic society, I would argue its place in the sci-fi genre (unless of course you subscribe to the "if there are trees, it's fantasy," theory). As for the fear that character development will take a back seat to tracker jackers, I am sure director Gary Ross knows what he's doing when it comes to that. Just watch Pleasantville.
It was a great chat last night. If you missed it, you can listen here or on iTunes. Make sure to tune in next Monday night at 10pm Eastern / 7pm Pacific for episode seven.
Labels: costuming fan art fireside chat hunger games