My Four Seconds with Jo 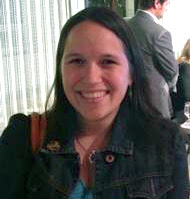 October 16th, 2012, I got to do what most people in the world have never had the privilege of experiencing. That night I met my idol, Jo Rowling at her Lincoln Center book launch event for The Casual Vacancy. After being a Potter fan for thirteen years, and a member of the fandom for five, I finally got to speak with the woman who gave Harry to the world. When I purchased my tickets in early September, I could not believe that a few short weeks later I would be face to face with the woman who changed my life.


During the time leading up to the event I agonized about what to wear and what to say when I met her. I wanted to let her know I was a fan without looking or sounding like a crazed fanatic (which, of course, I am). I eventually decided to go for the “young professional” look and wear nothing Potter-related except for a small Hufflepuff pin on my jacket lapel. As for what to say, I had a running list of possibilities in my head. These ranged from: "Thank you, you changed my life," to "You made my life better," "You made my world greater," and "I love you," all of which I am sure she has heard thousands of times before.

When I arrived at Lincoln Center, I was still worried about my chosen outfit (was it Potter enough?) and about what I was going to say. While waiting outside, I pushed away my anxiety and greeted old friends as well as made some new ones (Hi, Ben!). When I finally entered the David H. Koch Theater, I made my way toward my seat in the orchestra, gripping the hands of my close friend and Ravenclaw band mate, Kelly (a woman I would never have known had it not been for Harry Potter), and my Slytherin boyfriend Adam. I still had not yet processed what was about to happen.

When Ann Patchett took the stage, I clapped and cheered as I normally do when in the presence of greatness. Bel Canto is a favorite book of mine, after all. When Jo came out five minutes later, I slowly stood in a daze as tears began to roll down my face. This was the closest I had ever been to her.

The conversation between Ann and Jo flowed naturally and was peppered with humor and poignancy. I loved hearing their banter. The questions asked were interesting, and Jo's answers were entertaining. I was constantly reminded that this woman, my idol, is in fact just a woman like so many others... just a bit more successful than most.

The hour passed quite quickly, and soon it was time for the signing. I patiently sat in my seat and waited for my row to be called. As we were being lead out of the auditorium and up to the promenade level, I started to shake. As we inched our way forward, I managed to get out a tweet or two as well as instruct my boyfriend on picture-taking requirements. "Just keep taking them," I told him.

Before I was ready, Adam and I were at the front of the line. I was handed a copy of The Casual Vacancy and was politely ushered toward the table where Jo was signing. When it was my turn, everything I had thought about saying refused to make it to my lips, and I panicked for a moment before coming to my senses. I looked at the woman in front of me.

"Thank you," I said, my voice sounding distant. "Thank you for everything."

Jo looked up at me and at my jacket. "You're a Hufflepuff, I see," she said while signing. "Hufflepuff and proud."

Jo smiled as I walked away, tears once again spilling over my eyelashes.

Adam held my hand as I exited the theater.