This past weekend I attended my first Doctor Who convention, L.I. Who. I drove out to the Clarion Hotel in Ronkonkoma with a few of my Harry Potter friends. Five of us squeezed into a small hotel room and began our weekend with high expectations and nerdy giddiness.

From the very beginning, I was having trouble deciding which panel to attend, when to visit the fantastic vendor room, or when to simply stand in one place and ogle the amazing cosplay that surrounded me. At 6pm Friday evening, I attended a panel with pro cosplayers Christine Evans , Clay Dockery, and Sarah Blum on costuming led by the amazing Michelle Hermark and learned a lot about hacker spaces, plastic bonding paint, and pepakura. The con was off to a fun and informative start.

After a brief pause for dinner (it is so important to remember to eat at these things), I visited the vendor room, cash in hand, for the first time. While the actual room looked small, I believe it actually was some sort of Time Lord technology. The amount of swag that filled the room was incredible. I made several purchases right off the bat: a pixelated exploding TARDIS from PixelWho, two adorable framed pieces of the Second Doctor and Batgirl from Geek Boy Press, and an I AM SHER LOCKED lanyard from the wonderful Evie Tees. Over the duration of the weekend, I would eventually purchase a beautiful TARDIS apron from Jordan Dene and a TARDIS necklace, also from Evie Tees.

Following my productive trip to the vendor room, I convinced my friends to attend Match Game of Rassilon at 10:30. Of course, I happened to be the only die-hard Match Game fan in the room, but everyone else soon fell in love. With an amazing celebrity panel of Ian McNeice, Frazer Hines, Sylvester McCoy, Daphne Ashbrook, Sam Stone, and David J. Howe, the eloquent host led us on a wonderfully colorful adventure of nipple rings, mustaches, and various euphemisms for male genitalia. The show was hilarious and we could not stop laughing. The highlight of my evening was when for five glorious minutes, I was honored with the opportunity to be a contestant. While I lost the round with only one celebrity match (Sylvester), I kind of felt like I won anyway, especially since David Howe remembered my name for the rest of the weekend.

On Saturday I brought out my first cosplay: Zoe Heriot, companion to the 2nd doctor. From the moment I walked out of the hotel room, I felt like a baller. I was the only one dressed as Patrick Troughton's sparkly-jumpsuit-wearing companion from the future, and I looked pretty good. I'd been working on the cosplay for a long time, and it was finally perfect. I had a wonderful jumpsuit made by the talented Joy The Seamstress, a great wig from Ricky's NYC, amazing inexpensive white boots that fit my orthotics, and just the right black headband (thanks, Jenn!). As I wandered into the main lobby of the hotel, I excitedly greeted the other cosplayers from Troughton's era. There were several 2nd Doctors (both femme and male) as well as several Jaimes (both femme and male). There was even an adorable Victoria!

After an impromptu photo shoot and a trip to the vendor room to fangirl Frazer Hines,
I joined some friends for the Whovian Propmaking Panel where I got to witness some breathtaking props (Cassandra, anyone?) and learn a lot more about crafting. After the panel, I stayed in the room for a New Who References to Classic Who discussion. The panel of whovian writers really knew their stuff. It was fantastic hearing them speak about all the classic references and continuity issues in the current series. I especially loved hearing about my favorite classic episodes.

At 2pm I attended the Costume Cavalcade Pre-Meeting and signed up as "The Doctor's Angels" with Kitten and Jenn. I had never participated in a cavalcade before, and I was excited at the prospect. After signing up, I sat in for a few minutes of a Christopher Eccleston panel (feels!) and hurried out for a Frazer Hines photo and the Missing Episodes Panel. While the panel was great, the best part was when David Howe picked me out of the audience and said "Hi, Ariel!" while Frazer said: "It's Zoe!" The con just kept getting better.

Somewhere around 8pm I realized that I had forgotten to eat dinner. A quick call to the local Domino's soon solved that problem. Kitten, Jenn and I inhaled the pizza in the green room while waiting for the Cavalcade to begin. After wiping the tomato sauce off my face, and applying some last minute lipstick and blush, "The Doctor's Angels" paraded into the main room for the cavalcade. While we did not win, we did get a nice applause, and we felt great as we shouted "Hello, Doctor", sporting our sonic screwdrivers, and posing in the well-known Charlie's Angels silhouette pose.

After losing to the best cosplayer of the group (Christine as The Girl Who Waited), the Doctor's Angels returned to the hotel room for a quick costume change and returned to the awesome Dance Party of Rassilon where I danced the Macarena for the first time in about 15 years. The Electric Slide also played, but I had to draw the line somewhere. I managed to stay awake until about 2am, when I finally retired to the room to sleep.

Sunday morning found me somewhat awake and dressed as the 4th doctor at 7am for a mediocre breakfast in the main room. Not the best way to start a morning, but it was soon salvaged when I began setting up for the Kicking It Old School, the panel I was asked to be on along with Christine, Clay, and Katie. Even though we were scheduled at the same time as Sylvester McCoy's panel, we had a decent turn out and a successful panel.

The remainder of the convention passed by quickly as I visited the vendor room for the last time, changed back into muggle clothes, attended the charity auction (I won nothing, but not for lack of trying!) and eventually the final panel about the 50 years of Doctor Who with Daphne, Frazer, Simon, and Ian. I eventually left the con with Elena around 6:30pm. On the way home, we were already making our plans for Long Island Who Two in 2014.

For more pictures, please visit my Facebook album, Long Island Doctor Who. If you are unable to view the album, please feel free to friend me for access! 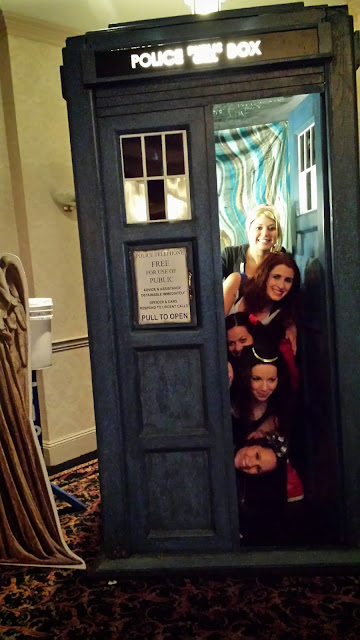